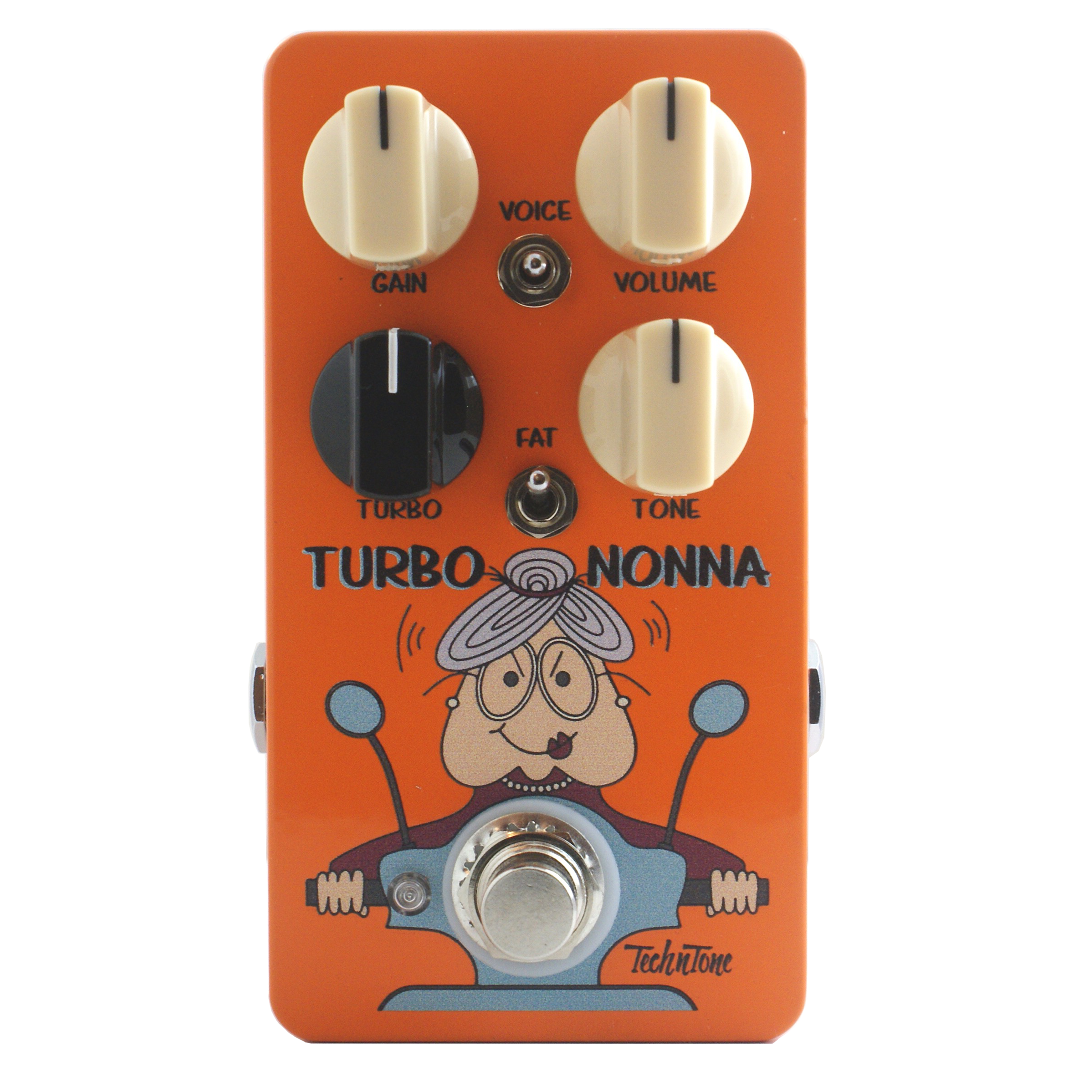 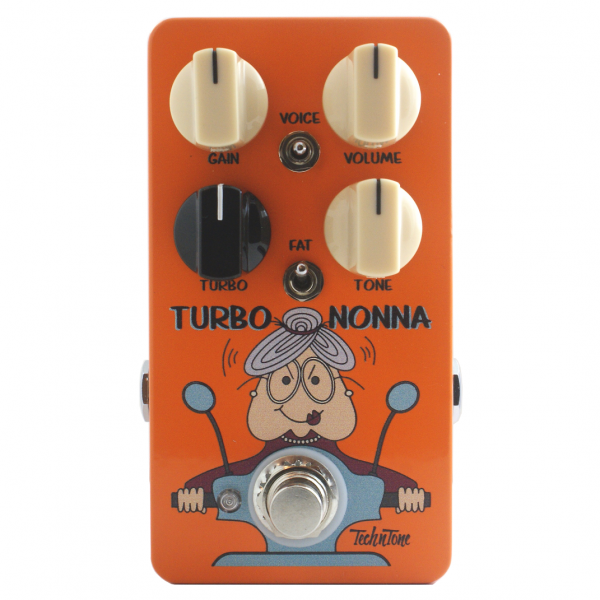 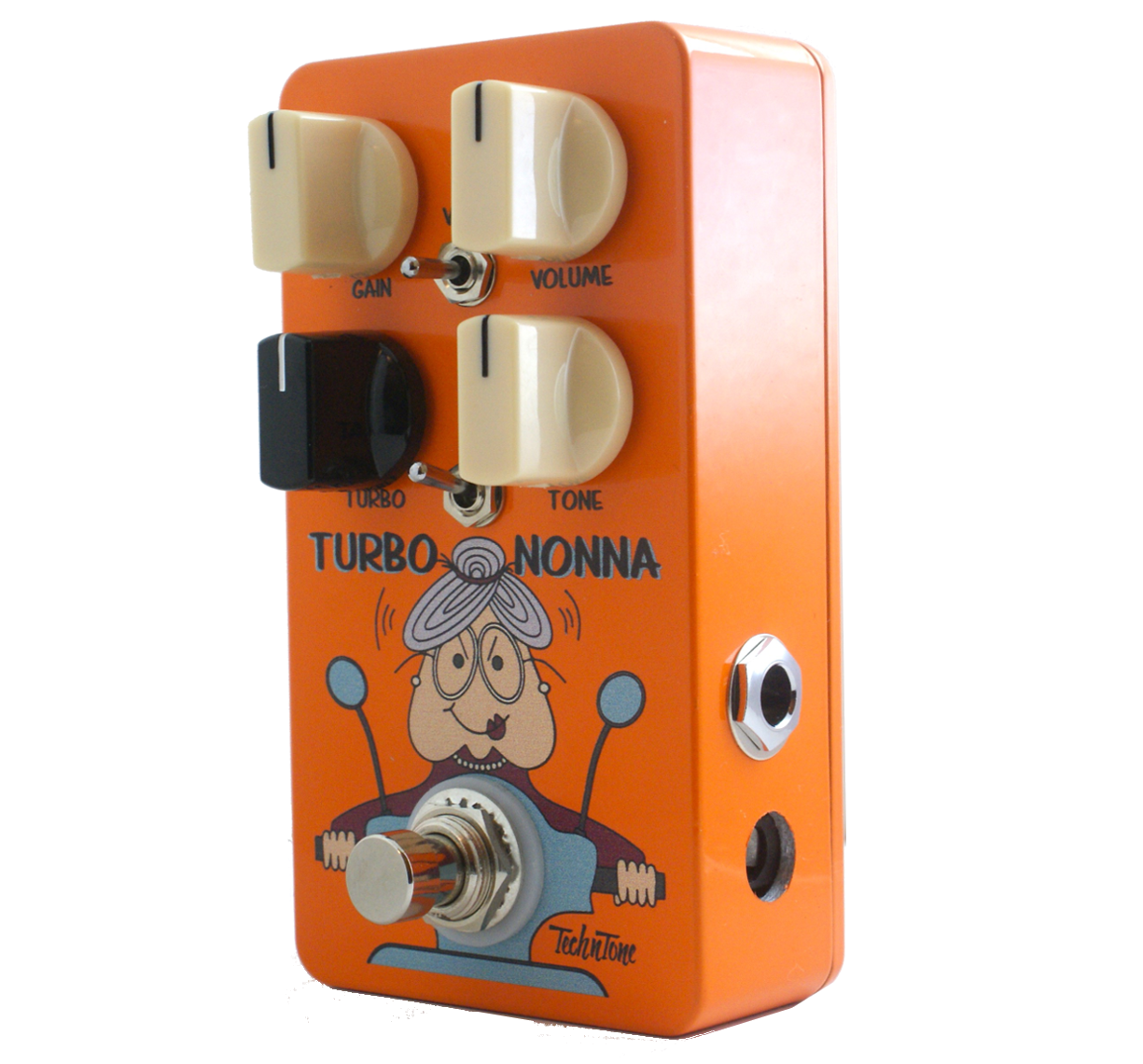 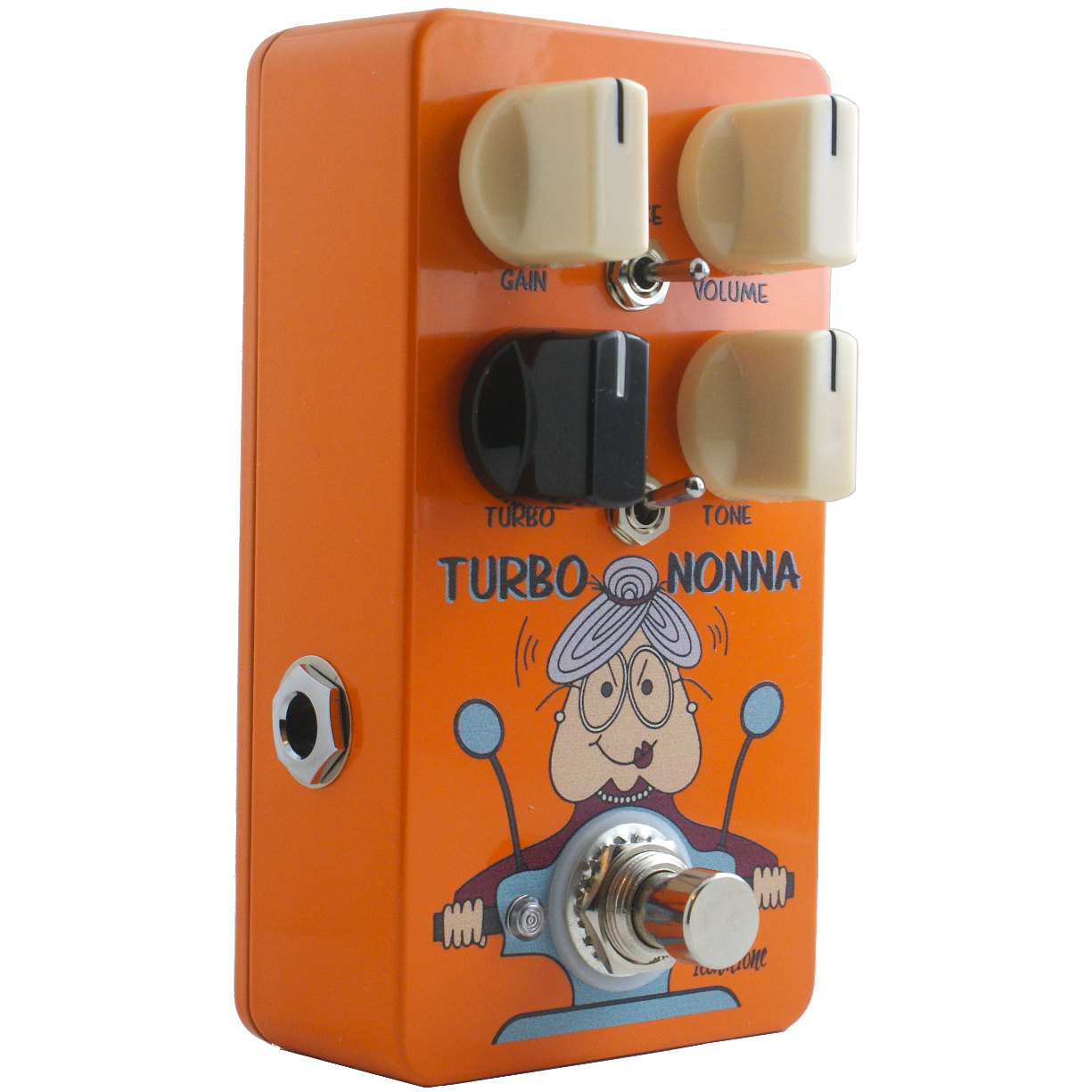 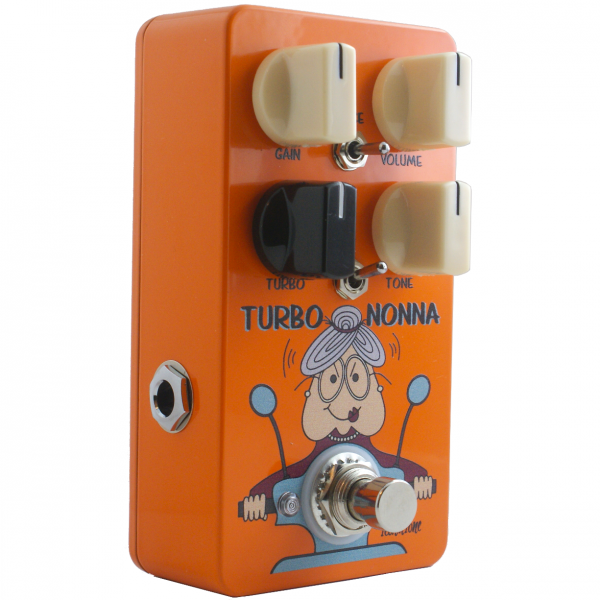 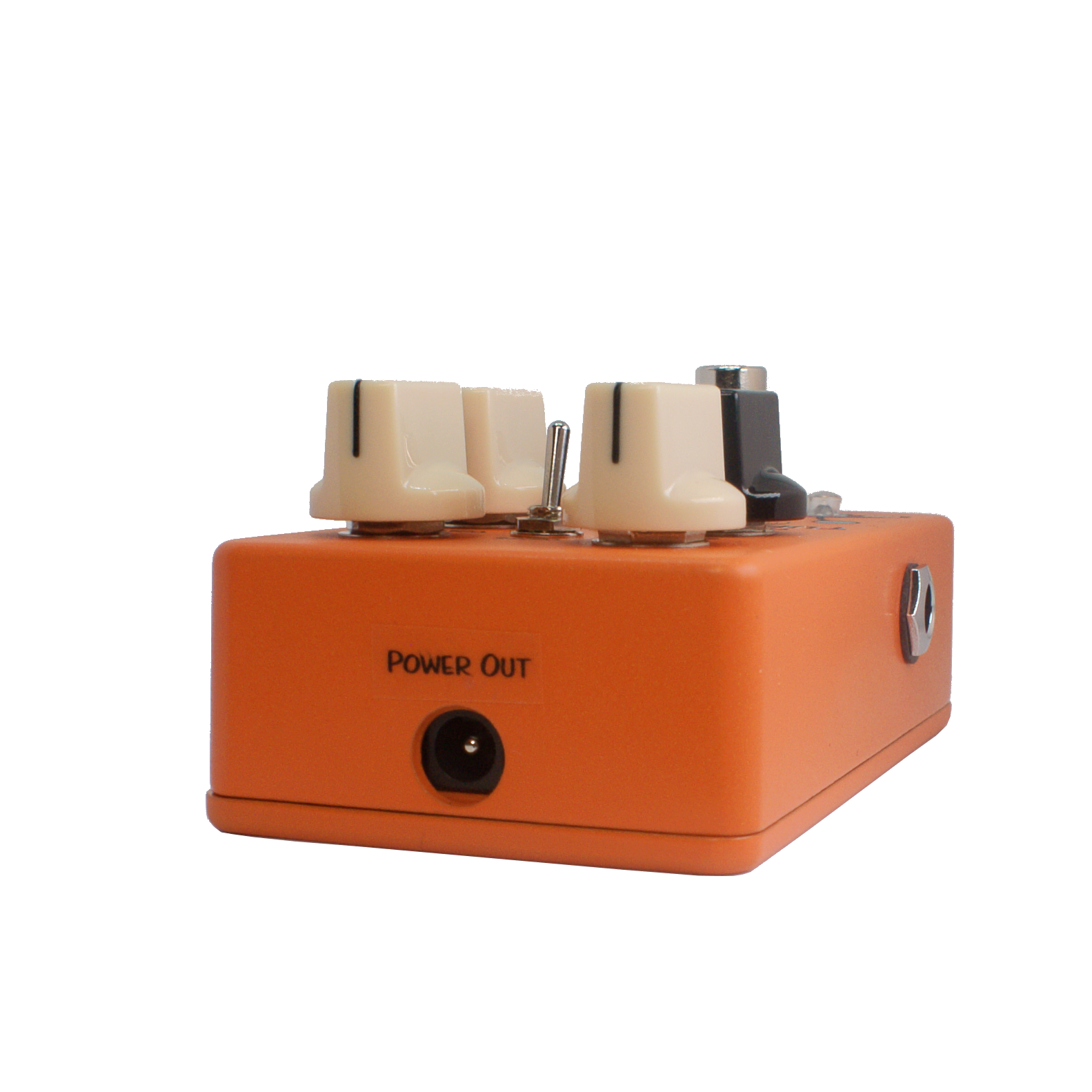 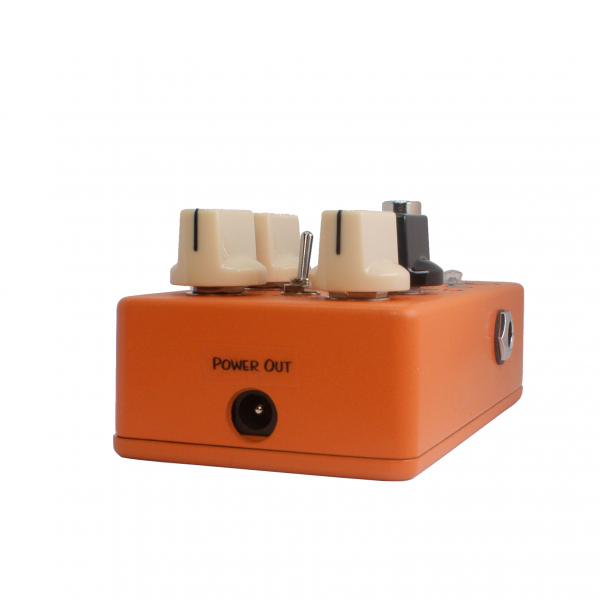 The Turbo Nonna is a versatile and transparent overdrive/distortion pedal. A very amp-like drive with dynamic and silky smooth distortion that will turbo drive your tone. With lots of gain on tap and headroom, the Turbo Nonna can add as much sustain and fatness as you require while maintaining the true voice of your amp and guitar.  In addition to Drive, Turbo, Volume and Tone controls, the Fat switch and 3 voices selector will give you a huge amount of sonic possibilities. Our Turbo Nonna is a generous Nonna and can power other pedals too. In default mode the power out outlet will provide regulated 12V centre negative and up to 400mA. An internal switch will also allow you to access SAG power out and added compression features (read below for more info).

Featuring a carefully voiced multistage drive circuit, Turbo Nonna is capable to deliver a large range of gain. From a boost-like tone enhancer to a heavy, fat, grit or deep sound. The Drive control will add gain just as a preamp gain control would, while the Turbo will add fatness, sustain and extra gain. The combination of these 2 controls alone offers a wide range of sonic combinations. But there is more…much more…

True to your one

Thanks to multilevel clipping and multistage signal amplification the Turbo Nonna adds to your tone without changing its character. Its circuit has been designed to preserve dynamic and sensitiveness at any level of gain and give you that great feeling of control on your fingers. And yes, it cleans up very well with the guitar volume control! The Tone control is a passive high cut that will adjust to the brightness of your amp and guitar.

The fat switch adds more punch in the low-mid frequencies, increasing even more the sonic possibilities. You will notice how this increased fatness can serve different proposes at different levels of gain.

The Voice switch allows you to select 3 different clipping with different level of compression and headroom. The top position delivers an asymmetrical silicon diodes soft clipping, the bottom position selects an original asymmetrical transistors smooth clipping circuit while the centre position offers the highest headroom and the most open sound (use this position for more boost-like settings).

Thanks to the internal step-up voltage regulation circuit the Turbo Nonna boosts the 9V standard power supply to 12V, adding to the already large dynamic and increasing headroom.

Our Turbo Nonna is a generous Nonna and can power other pedals. In default mode the power out outlet will provide regulated 12V centre negative and up to 400mA. This features solves a few very common issues that we all had at least once…ever ran out of power outputs from your pedal power supplier? Ever wished you could ran shorter power cables and have a neater pedalboard? Ever wished to power that pedal, just that pedal or perhaps a few more, with 12V rather than 9V? The power out features is addressing all the above. You can power one or more pedals (with daisy chaining) using a standard centre negative cable out of the power out jack at the top of the pedal. The output voltage is normally a regulated 12V but it can also be lowered to a non-regulated less-than-9V output. Yes, that’s right, there is a…

Shhh!! It’s a secret…if you like more compressed, more saggy sounds this could be your favourite “tweak of the week”. Just unscrew the bottom of Turbo Nonna to access a hidden dip switch that lowers the internal voltage of the pedal to 9V and therefore allows you to reduce headroom and achieve higher compression and higher level of dirt. The same switch is also controlling the power out function and pushing the switch to the left will also result in lowering the power out voltage to a lower-than-normal value and therefore simulating a dying battery…or a dying valve if you rather…for all the pedals that you power using the Turbo Nonna power out outlet.

Here is the more technical bit…with the switch on the right the power out will be a regulated 12V as explained above, with the switch on the left instead the power out voltage will be a non regulated voltage dependent on the power in, and more specifically about 0.8V lower than the power in voltage. So, if you power the Turbo Nonna with exactly 9V and you switch the hidden red dip switch to the left you will get approx. 8.2V at the power out. Of course you will get back the 12V if you switch the hidden red switch to the right again.